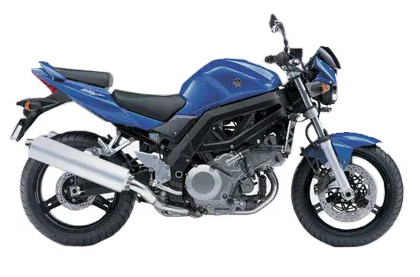 The Suzuki SV 1000 came on the market in 2003. The engine block is a 996 cc V twin with the cylinders in a 90 degree position. The Suzuki SV 1000 only has a top fairing and no side fairings. The side tubs are available as an accessory.

This model has quite a number of parts that are the same as the Suzuki SV 650. For example, the 17-liter tank, the top cockpit, the rear cockpit part and rear subframe including the rear fender are the same for both models. In 2003 and 2004 the SV 1000 was also delivered as a Naked version. A round headlight was then mounted instead of the top tub with eye-shaped lamps.

The front fork complete and brakes are the same as those of the GSX R 600. The engine block has also been taken over from the Suzuki TL 1000 S, but adjusted at more than 300 points to improve the power. The block delivers a capacity according to Suzuki of 120 HP at 9000 rpm and a torque of 102 NM at 7200 rpm. The suzuki SV 1000 has fuel injection instead of carburetors.

The first model dates from 2003. A K3 model. An update came in 2004. The K4 model with slightly lower footrests and a slightly lower saddle. In additionto the other fork. In 2005 the K5 model came to be recognized by the black frame, black wheels, larger throttle body (54 mm), a lighter flywheel, higher compression and a modified ecu. The last model dates from 2007 with only adjustments to the available color scheme.

None of the engines with 1000cc engines sold well, even though the comparable 650cc engines are prize winners and very popular. Suzuki stopped selling the Naked version of the SV1000 in the US in 2004, while the S half-cockpit version continued until 2007 and in 2008 neither of the two models was on the company's global website.

Motorparts-online.com has demolished a Suzuki SV 1000 several times, and we may still have spare parts for you.

➡ View all parts of this model.